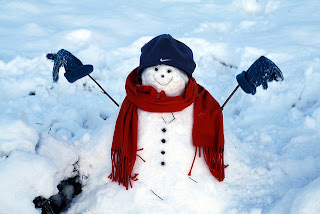 The Snowman Architecture breaks down a large IT system into small vertically partitioned subsystems called snowmen. These snowmen interact with each other through asynchronous messages. Snowmen are designed to be as autonomous as possible from each other using a design methodology known as Simple Iterative Partitions1 (SIP). Figure 1 shows an IT system designed using the Snowman Architecture.

The Snowman Architecture is in contrast to a traditional architecture that uses a methodology such as TOGAF2 to create a horizontally partitioned system. Figure 2 shows an IT system designed using traditional methodologies.

There are several contrasts that immediately jump out in comparing the Snowman Architecture to the traditional approach.

Okay, now that you remember the basic overview, let's look at the economic advantages of The Snowman Architecture.

Figure 3 show the relationship between complexity and project size of a traditional versus a Snowman Architecture. 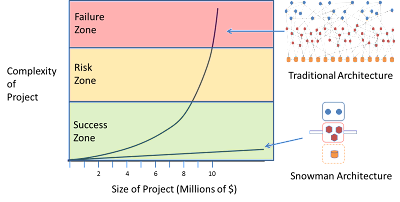 In contrast, the complexity of the Snowman Architecture starts low (as does the traditional architecture) and then increases with a shallow linear slope. There is little difference between a shallow linear line and an exponential slope at low numbers. In Figure 3, you can see that at project sizes under $1M, there is effectively no difference between the Snowman Architecture and the traditional approach.

However this changes quickly as the project size increases. Traditional architectues are already in the Danger Zone by the time they hit $8M and by the time they hit $10M they are in the Failure Zone. In contrast, the shallow linear complexity slope allows the size of the Snowman Architecture to remain comfortably  in the Success Zone until well past $100M in project size. In fact, it isn't even clear that there is a size limitation with the Snowman Architecture.

The bottom line: a traditional architecture becomes likely to fail at around $5M whereas a Snowman Architecture has a high probability of success even at $100M.

To compare the ROI of the Snowman Architecture versus the traditional horizontally partitioned architecture, let's take some reasonable project numbers for, say, a $20M project.

Using a traditional architectural methodology (e.g. TOGAF) we can reasonably assume the $20M project will go over budget by at least 200% and will cost an additional 400% in lost opportunity costs5.

Using the Snowman Architecture we won't be doing a single $20M project, we will be doing some number of smaller project of at most a few $M each. Projects of this size are well within the Success Zone (as shown in Figure 3.) Projects in this zone typically have no overruns and no lost opportunity costs.

The Snowman approach requires an additional phase in the project life cycle, a pre-planning phase. This is where most of the work is done to design and plan the snowmen. In the worst case, this phase could add 10% to the overall cost of the project.

Of course, these numbers are just best guesses based on what I have seen of industry data. Feel free to plug in actual numbers from your own projects.  But based on these numbers, we can calculate the Snowman ROI.

Without using the Snowman architecture, we expect a total cost of

The difference between the two approaches is

The ROI of using the Snowman approach is thus

There are many benefits to delivering a project on time other than eliminating the lost opportunity costs. It is hard to measure these benefits, but they certainly include the following:

As you can see, there are compelling reasons favoring the Snowman Architecture over traditional approaches. The reduction in complexity is huge and the ROI would make even the most seasoned CFO salivate  But the most compelling reasons favoring the Snowman Architecture may not be economic, they may be technical. But for those benefits, you must wait for the next installment of this blog.

(1) SIP is a patented methodology for autonomy optimized partitioning. It is described in a number of places, including the web short SIP Methodology for Project Optimization.

(2) TOGAF® is a methodology owned by The Object Management Group. It is described on the TOGAF 9.1 On-Line Documentation.

(3) If you are interested in the mathematical relationship between size, connections, and complexity, see my white paper The Mathematics of IT Simplification.

(5) Unfortunately, we do not have good data on what these number are world-wide. These particular numbers came from averaging a number of large projects discussed in the Victorian Ombudsman Investigation into ICT Enabled Projects (2011).

Very nice article and discussions. However, I wonder where would data that will across multiple snowmen sit? For example, enterprise product information may be used by accounting, marketing, sales, CRM. If the data will be owned by 1 snowman, others will need to access the data via its service. This may not be very effective.

We need to re-use one snowman. For example to re-use the data it encapsulates. But then the whole IT landscape is back to the oriented graph of inter-connected snowman.
Mail server is a snowman. It contains data, components with logic and components implementing services. Mail servers communicate to each other using asynchronous messaging paradigm. The whole e-mail system is oriented graph of snowman nodes. No vertical or any other partitioning.Still the whole system is very reliable and it works very well, as we know.

What is new in Your methodology ?